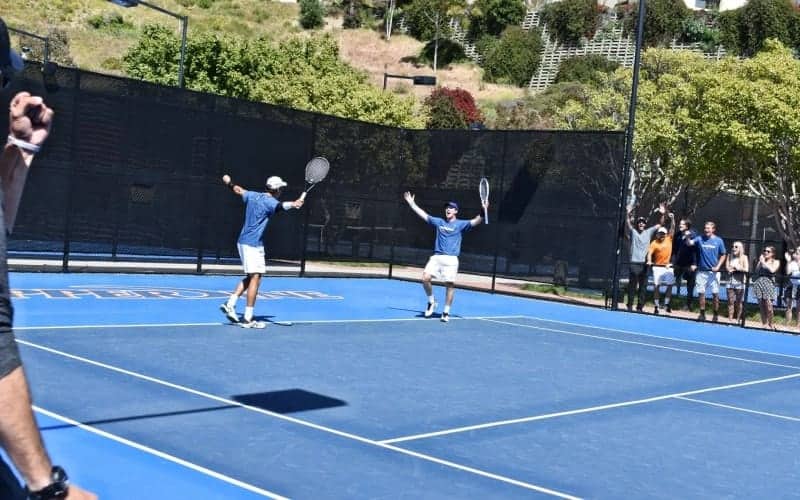 All of us at My Tennis HQ are big advocates for college tennis. We have all had the once-in-a-lifetime opportunity of playing tennis as a team, while still pursuing a degree at the same time – and we think that everyone who has the opportunity to do the same should go for it. Not only is it a much safer bet than attempting to go pro straight out of high school, but you will actually have a lot more fun along the way.

While college tennis is not as popular as other college sports like football or basketball, it can still draw some pretty large crowds. And if you ever watched a close college tennis match, you know how exhilarating it can be. Yet, we find that college tennis rules can be quite confusing for a lot of people, even for those who are familiar with normal tennis rules.

So how do the matches in college tennis work? In essence, coaches select a line-up (ranking) for the team’s singles and doubles. The match begins with 3 simultaneous doubles matches (up to 6 games), and the first team to win 2 out of the 3 takes the doubles point. Then, 6 singles matches are played – each one counting as 1 point. The first team to win 4 points wins the overall match.

While the answer above gives you a general idea, there are a lot more details that you should know about college tennis, and we’ll cover all of them below.

In the majority of tennis matches, one team will be playing at home while the other will be playing away (some matches are played at a neutral venue). And the preparation for the match differs a lot depending on which side you’re on.

First of all, if you’re playing away, your day will be much more focused on the game itself. Players usually stay at a hotel, and they will usually go to the venue a few hours before the match starts. Once they get there, they’ll start prepping their gear (changing grips, picking up restrung rackets) and taking care of their bodies (usually some physiotherapy sessions). About an hour or so before the match, they will start the official warm-up.

If you’re playing at home, on the other hand, your preparation will look quite different. If your game is not early in the morning, you might even need to attend classes before it. You’ll go on with your day as you normally would, but a few hours before the match you head to the tennis center. Once there, you’ll hang out in the locker room for a while, also prepping up your gear and maybe talking to your coaches. About an hour or so before the match, players will start their warm-up.

College tennis venues usually have more than 6 courts, so the home team usually takes the 3 main courts while the away team takes the 3 “bottom” courts. In some cases, venues only have 3 or 4 courts, and if that’s the case then the teams need to take turns. Usually, one team will start warming up 2 hours before the match and stop with about 1 hour and 15 till the start. The other team will then warm-up for 45 minutes. About 30 minutes before the match starts, both teams will split up the courts for a final warm-up.

A good warm-up is incredibly important for college tennis matches. Since you are not allowed to warm-up with your opponent, a slow start can cost you the match. All of a team’s players usually warm up together, so it’s common to see a traditional tennis warm-up followed by some doubles drills as a team.

While the players are warming for the match, the coaches for both teams are usually busy defining and exchanging the line-ups. A line-up is essentially a rankling if the team’s players, and the coach will number his players from 1 through 8 in singles, and will rank the doubles teams from 1 through 4. Only 6 of the players play singles and only 3 pairs play doubles, so the 7th and 8th singles players are reserves and the 4th double team is a reserve as well.

Once a coach presents the proposed line-up, the opposing coach can either accept it or contest it. A coach will contest a line-up if he or she believes there is “stacking” going on. Stacking is the act of putting a player in a position he or she is clearly not fit for (for instance, putting your worst player in the #1 position). So while coaches need to be strategic with their line-ups, they need to keep in mind that it might be rejected.

If the line-up is contested, the coach may rearrange it or try to explain to the opposing coach why he arranged the line-up in that order. Once both coaches agree with the line-ups, the matchups are set. Finally, if a player gets injured either during the warm-up or the doubles match, the coach needs to move every player up (and cannot rearrange the whole line-up).

College tennis matches have a very unique format, designed to not exhaust players too much and to keep it entertaining for fans. One of the most interesting things about college tennis is that both on-court coaching and loud cheering are allowed – very different from professional tennis. We will cover some other specifics about college tennis below.

In college tennis, the only opportunity players have to warm up is with their team. Once the actual match starts, there is no warm-up. Usually you will walk into the court, and an umpire will do a coin toss to decide which player will start serving. After that, players go straight to play the first point.

In the majority of cases, college tennis matches start with doubles. All 3 doubles matches happen simultaneously, and the first team to win 2 out of the 3 matches takes the doubles point. If the third match is still going on after a team wins the doubles point, that match is usually stopped.

College doubles matches are played in a single-set format up to 6 games. If the pairs tie at 5-5, the first team to get 7 games wins. If they tie at 6-6, the teams will play a tiebreak to 7 points and the winner takes the match.

In addition, the matches are played in a no-ad format – which means that when the game score reaches 40-40, the receiving team decides which player will return the serve. The winner of the point at 40-40 wins the whole game. There are also no “lets”, which means that if a serve hits the net and lands on the service box, the point will continue on.

Singles are also played using a no-ad and no-let format, but they are played in a 2-out-of-3 format. The first player to win 2 sets wins the match, and the players normally play 3 sets to 6 with a tiebreak at 6×6. However, on some occasions, the 3rd set may be a 10-point tiebreaker.

How Long Does A College Tennis Match Last?

Play Out vs. Clinch

If a team reaches 4 points and wins the match, the coaches may choose to either continue or stop the remaining matches. Sometimes they choose to continue them so the players can get more rhythm, but other times they just want to go home as soon as possible.

Normally after a match, the players will recover as a team. When I was in college, we always did some stretching and recovering as a team, in order to avoid injuries. Players will normally sit down and talk with coaches to get some feedback as well. After that’s done, players will focus on some more individual recovery methods, like taking an ice bath, doing physiotherapy, or getting a big meal.

Lastly, it’s important to mention how the college tennis rankings work. While no one really knows the exact formula, teams are ranked based on the quantity and quality of their wins and losses. Only a certain amount of teams show up in the rankings (usually top 50 or 75), but each team does, in fact, have a ranking. When a team defeats a team ranked higher than them, they will move up in the rankings. Similarly, if they lose to a low-ranked team, they will move down.

So at the end of the day, a team can go a whole season undefeated and still finish unranked – if they only play unranked teams. For that reason, coaches need to plan their team’s calendar well.

In addition to the team ranking, there is also a singles ranking and a doubles ranking, and they both work the same way – you get more points the better your win is. Normally only the top 2 or 3 players of each team have opportunities to become ranked.