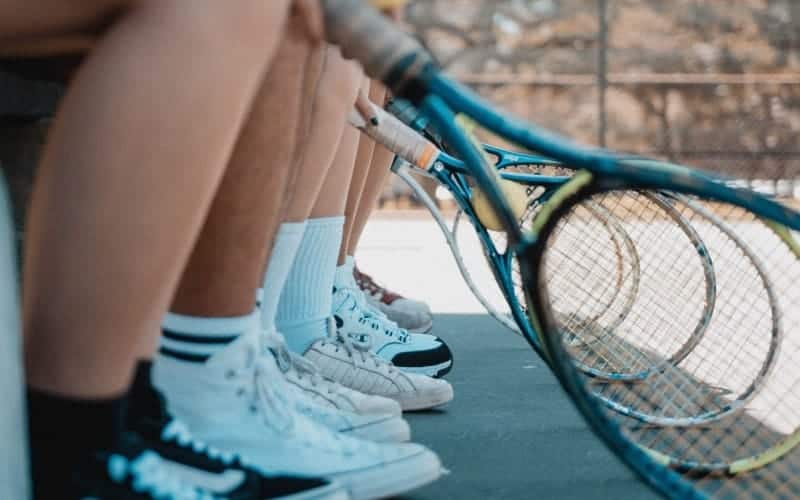 There have been massive changes in tennis racket technology over the last 50 years. In the 1970s, wooden rackets generally held sway. Metal frames became popular for a time, but the next big development was the move to graphite frames in the 1980s. Since then, a wide variety of composite materials has been used in racket manufacture, with substances ranging from titanium to graphene being employed. Compared to their wooden ancestors, modern rackets can be made longer, with larger heads, while being significantly lighter and stiffer. These characteristics mean that it is much easier to hit the ball hard and impart spin with modern equipment.

In the same way that modern rackets are easier to use and more effective than their predecessors, there are many differences between the rackets you can buy today. They will have different balance or stiffness, as well as being fitted with various types of string – and all of these elements will affect the way you play the game.

Choosing the right tennis racket is an important matter for a player’s overall game. Depending on the player’s physique and playing style, some rackets will optimize the player’s strengths while others will accentuate weaknesses. In addition, choosing the wrong racket can eventually lead to injuries.

How Rackets Impact Your Game

Typically, the larger the head, the faster the ball will rebound from the racket and the larger the ‘sweet spot’ will be. The sweet spot is the area of the racket face where the ball bounces off most quickly and precisely, so inexperienced players benefit greatly from this area being as large as possible. In addition, a larger head means that a racket is less likely to twist if you do make an off-center contact with the ball.

On the face of it, you might think that all players should use the largest head size possible, in order to maximize the benefits described above. In practice, top players tend to prefer rackets with modestly-sized heads. This is due to the fact that they can already generate plenty of power, and what they are looking for is control and maneuverability, which they will get from rackets with smaller heads.

Frame thickness is another characteristic that will impact your game. Wider frames are stiffer, and will result in the ball rebounding more quickly, offering increased power. The downside is that a stiffer frame transmits more vibration to your arm. Grip size is also significant, with a smaller grip increasing maneuverability but requiring the muscles in the hand and forearm to work harder.

The string used is particularly critical, as this will influence how it feels to strike the ball, plus how much spin and power can be imparted. Soft strings offer good ‘feel’, but only modest power and control, and will tend to break frequently. Thicker, tougher strings will be stiffer, meaning that they can provide power, and, at higher tensions, control, but they offer reduced feel and transmit more vibration to your arm.

Issues Caused by Playing With the Wrong Racket

If a big hitter tries to use an oversized racket with a large sweet spot, they will almost certainly find that they lose accuracy and control, as the powerful, but not especially maneuverable, frame will not suit them. Similarly, if a player with little power begins to believe that they are Federer, and switches to one of the rackets he has popularized, they will soon realize that he plays a different game to them. These rackets offer great control and accuracy for players with attacking shots who seek precision, but offer little margin of error or additional power for lesser players.

There are potential physical issues that can arise from using the wrong racket. Stiff frames and tough, thick strings can transmit a lot of vibration through a player’s arm. Excessively light rackets can cause similar problems. This type of vibration is believed to be a primary cause of tennis elbow, which can be very painful and difficult to get rid of. Using too small a grip can also aggravate tennis elbow.

The trend in recent years has been for tennis rackets to become lighter. Wooden rackets were substantially heavier than graphite ones, and the latest rackets are, on average, lighter than many of their predecessors. Nonetheless, heavier rackets do have advantages. If everything else, including swing speed, stays the same, a heavier racket will produce more power. It will also transmit less shock through a player’s arm, protecting against tennis elbow, and due to its solidity will offer better control.

Lighter rackets make it easier to produce faster swing speeds but will normally transmit more vibration. Another aspect of racket weight is the balance of the frame. Some rackets are designed in such a way that more of the weight is in the head (‘head-heavy’), whereas others are weighted more towards the grip. A head-heavy racquet does not need to be heavy overall, but it will feel heavier to swing, and will produce more power than a more balanced frame. On the other hand, a less head-heavy frame will allow better control.

The very cheapest rackets are made from inferior materials and are not suited to better players, although they are ideal for beginners. The most expensive and latest models will doubtless be advertised with various dubious pseudo-scientific claims. Ignore the latter unless you are a wealthy and very serious player, and look for deals on the models that were cutting-edge a year or two ago, keeping in mind the important characteristics described earlier. These rackets will be just as good, and considerably more affordable.

Choose the right racket and you will play the game better and minimize injuries. Find a racket with the right weight, head size, grip, stiffness, and balance, and avoid the overpriced current models if possible.