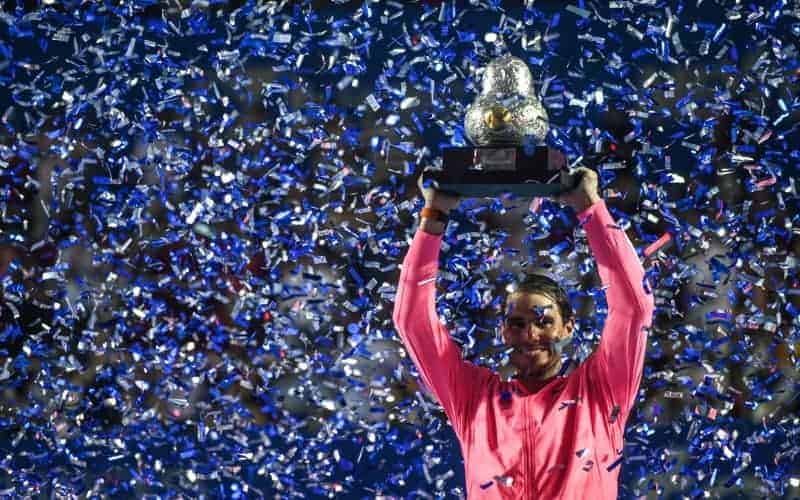 Most people who play tennis will experience, at least once in their lives, that satisfying moment when they clinch the final point and they win a tournament. Having achieved their objective, they will hope for a nice trophy to act as a memento. Although some small tournaments may do without trophies, the organizers usually recognize that the players like something to put in their display cabinet at home and attempt to provide something suitable.

After winning smaller tournaments, tennis players get to keep their trophies. Some events are more traditional and have a ‘permanent’ trophy that is engraved each year with the name of the latest winner. The winner of such tournaments gets a small replica of the trophy which they can keep.

In professional tennis, there is a distinction between the Grand Slam events and the majority of others. Grand Slam tournaments tend to have prestigious, historic trophies which the organizers do not like to let out of their sight, so they issue replicas to the champions. Many of the other leading events tend to be happy to supply a new trophy each year, and will periodically revise its design.

At Wimbledon, the organisers are very proud of the event’s history, and the impressive trophies reflect this. The Gentlemen’s Singles Trophy was first awarded in 1887, having cost 100 guineas (equivalent to around £13,900 in 2020) to purchase. It is made of silver gilt, and is 18 inches tall and 7.5 inches in diameter.

The Ladies’ Singles Trophy, known as the Venus Rosewater Dish, is a silver salver 18.75 inches in diameter which was first presented in 1886. These trophies are engraved with the names of the winners each year, and, after the successful players have been photographed with them, they are stored in the Wimbledon Museum for the rest of the year.

The champions are given three-quarter-sized replicas to keep, and these are also engraved with the names of all the past

The winner of the men’s singles at the French Open is presented with the ‘Coupe des Mousquetaires’, which was last redesigned in 1981 and which is named in honor of the ‘Four Musketeers’ of French tennis who dominated the game in the 1920s and 30s.

The women’s champion is awarded the ‘Coupe Suzanne Lenglen’ which was first presented in 1979, and which honors the Frenchwoman who revolutionized the women’s game in the early part of the 20th century. As at Wimbledon, both trophies are only brought out for the presentation ceremony and are then engraved and retained at the venue.

The players are given a replica which is normally smaller than the original. The size of the replica has varied in recent years due to the achievements of Rafael Nadal in winning an unprecedented number of championships. For his 10th, a replica the same size as the original was given to him, and some subsequent replicas have also been a little larger than the standard size.

The US Open presents permanent trophies that remain at the venue, in common with the other Grand Slam events. They are impressive sterling silver creations, bearing the name of the US Lawn Tennis Association, and engraved with the names of the previous winners.

All trophy work at the US Open since 1987 has been undertaken by iconic jewelers Tiffany & Co, as immortalized on film by Audrey Hepburn. The men’s trophy weighs a fairly hefty 10 pounds, so it is not ideal for an exhausted player to wield after a long final. Although the US Open follows Wimbledon and Roland Garros in issuing replica trophies to the winners, it differs by making them the same size as the originals.

The permanent trophies at the Australian Open are named after famous Australian players from the 1920s and 30s. The men’s champion receives the Norman Brookes Trophy, named after the first non-Briton to win the men’s singles at Wimbledon. The latest version of the trophy was first prersented in 2013.

The women’s singles winner is awarded the Daphne Akhurst Memorial Cup, which is named after a five-times Australian singles champion who sadly died at a young age, and was first presented the year after her death in 1934.

In each case, the trophies remain on display at the venue, and a reduced-size replica is given to each of the Australian Open champions.

Although the Grand Slam events are fairly consistent in their approach to awarding trophies, the same cannot be said of the other professional tournaments.

Many events will produce a new trophy each year, sometimes identical to that awarded before, other times based on a fresh design. These are often given to the winners to keep, although this can be something of a double-edged sword, as many of the designs are bulky and not particularly appealing.

There are some amusing pictures online, if you care to search, of slightly bewildered players clutching hideous pieces of modern art! One or two events have sought publicity by offering extremely valuable trophies to keep for multiple winners. For example, in Antwerp, a diamond-encrusted gold tennis racket worth around $1,000,000 was offered to any player winning the event three times in five years. Ivan Lendl won the first racket in 1985, and the women’s equivalent was claimed by Amelie Mauresmo in 2007.

There are many magnificent trophies to be won in tennis. The Grand Slams have historic permanent trophies, and issue their champions with replicas, but these are still impressive. At lower levels, there is no consistent pattern, and the quality of the trophies also varies, but some are undeniably striking and others can be very valuable.