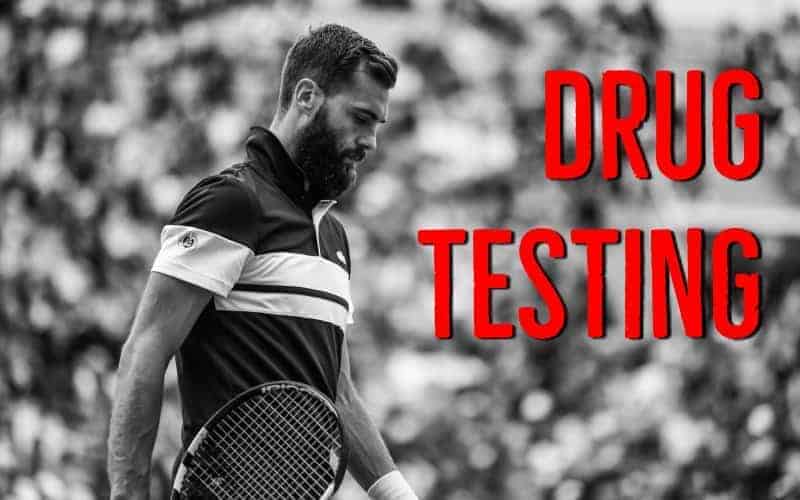 There are sports like cycling where almost every fan knows that there are drugs involved and sometimes someone gets busted. Then there are sports where you would never expect anyone to cheat – like tennis. People see tennis as a clean sport. For the most part, it is. Very few players ever test positive for banned substances, but the authorities can make players’ lives pretty tough.

Every top professional tennis player gets tested for drugs. It started in the 1980s when they tested mainly for drugs such as cocaine, methamphetamine, and marijuana. It wasn’t until the 1990s however that players began to get tested for performance-enhancing drugs.

But even now experts regard the testing methods as highly questionable as the sport doesn’t chase with any determination after EPO and synthetic testosterone, the two substances with the biggest benefits.

How Often Do Tennis Players Get Drug Tested?

This is an extremely controversial and much-discussed topic within the sport of tennis. This is because there is no set number of tests that each player must take. It is different for each one.

Any athlete is subject to testing by three organizations – the international federation of tennis, the anti-doping agency of the country the athlete is from, and the world anti-doping agency. So, for example, in 2017, almost every top 20 player on the men’s side had 14 tests a year from the ITF and WADA plus additional ones from their national anti-doping agencies.

And last year you can look at the numbers of tests and see big discrepancies. Rafael Nadal and Roger Federer were both tested, by the ITF, 29 times. Novak Djokovic on the other hand only 24 times. At the top of the list was South Koreans Chung Hyeon with 34 and Jan-Lennard Struff with 31.

The testing procedure is the same for every player on the ATP and WTA tour, as well as on the ITF Pro Circuit tournaments and ITF Junior events. The procedure is:

A doping control officer will notify you that you have been selected, then you must be in full view of that office until you provide a sample. You’re not allowed to urinate before going to the Doping Control Station. Furthermore, you must report there immediately unless you participate in a victory ceremony, attend a media interview, take a shower, obtaining urgent medical treatment, or you are looking for your ID or an interpreter who must accompany you.

In that case, the player can delay reporting to the doping control officer for a brief period. After the player has reported he delivers the sample and should declare all medications, substances or supplements they are taking or have taken over the last seven days. Lastly the player needs to sign the doping control form as a definitive record of the rest. The procedure for blood testing is very similar.

In 2009 Gasquet had tested positive for cocaine at the Miami Open and was handed a provisional 12-month ban. However, an ITF panel overturned the ban a few months later, accepting Gasquet’s claim that the substance was only in his system due to him kissing a woman who had taken cocaine at a nightclub.

Agassi tested positive for crystal meth back in 1997. He however got away with just a 3- month ban as he claimed that the drug was taken unknowingly and blamed the positive test on a spiked drink.

Cilic was tested positive for nikethamide, a stimulant at the BMW Munich open in May 2013. He was banned for a total of 9 months for this drug abuse by WADA. Cilic claimed that he was in no knowledge of taking the banned substance and unsuccessfully appealed the decision at the court of arbitration for sports.

Troicki refused a mandatory blood test in 2013. He said, that he did not agree to the blood test because he was sick when the test was ordered by the ITF. However, he did provide a mandatory urine sample. He also suffers from a fear of needles that makes a blood test difficult. The ITF however refused Troicki’s claim and banned him for 18 months due to the failure to comply with the organization’s anti-doping regulations.

Sharapova failed a drug test at the 2016 Australian Open. She had tested positive for meldonium, a substance normally used in heart medication that increases the oxygen supply to the blood. It is also used to treat heart disease and the Russian maintained there was no wrongdoing on her behalf as she admitted using the prescription drug for over ten years. Her initial ban of two years was reduced to 15 months after a court found there was no intention to cheat and no significant fault on her behalf.

Drugs in tennis remains a difficult and delicate subject. Do I believe that the sport is as clean as everyone wants to believe? Yes, but could there be some players that do cheat, and we just might never found out? Yes.

The testing system is confusing not just for the fans or the media but also for the players. It seems random and it doesn’t help that each player basically has a different number of tests each year. If the ITF doesn’t properly regulate its testing procedures nothing will change but maybe they don’t want it to, as they would love to keep the image as the clean sport.