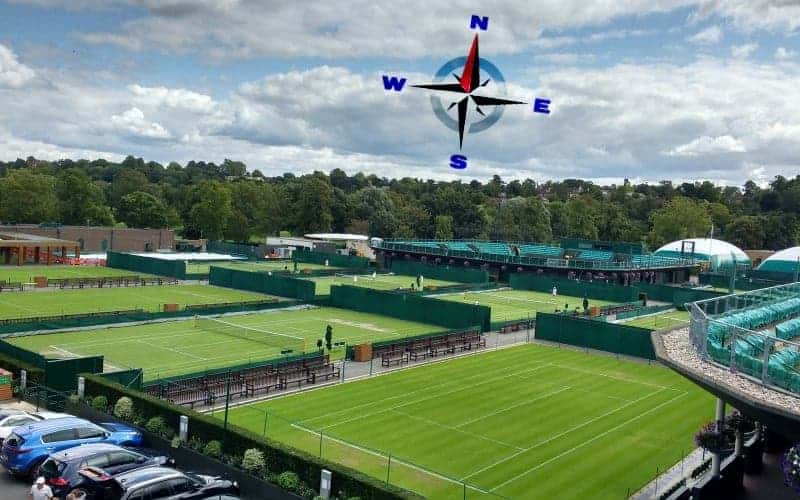 If you’ve played much tennis, you surely have played at venues where the courts are not well aligned, and you struggle to see the ball on a sunny evening. The rotation of the Earth is towards the east, meaning that the Sun rises in the east and sets in the west. If your tennis court faces east-west, the Sun will cause problems for players in the mornings and evenings.

Unfortunately, many clubs are built on plots of land which do not offer enough space for a real choice of orientation. If faced with a choice of building four courts facing east-west, or two courts facing north-south, many will choose the former option, even if it produces a poorer playing experience.

Ideally, tennis courts should have a north-south orientation so players don’t have to face the sun directly and so that the court is not filled with intermittent shadows (produced by its surroundings). However, some courts are not built with such orientation due to spacing and terrain limitations.

In practice, tennis courts face in all manner of directions due to factors that have nothing to do with the benefits for players. If, however, a large plot of land was available, and courts could be built facing in the ideal direction for players, they would face broadly north-south, as the rising or setting Sun would not then be a major issue. Nonetheless, there are many other complexities to consider.

Court Orientation And The Sun

The sun can cause real difficulties for tennis players. On a poorly aligned court, or even on a well-aligned one at certain times of the day or particular seasons, a player who is trying to serve may find it almost impossible to see the ball when tossing it up without temporarily blinding themselves. This results in either a weak serve or a problem with the next shot.

Equally, in doubles, it can be extremely unsettling for the net player when their partner is serving and they are looking directly into a low sun. If the returner, who will be able to see much more clearly, strikes the ball hard at the net player, they may not even see the ball before it hits them. Players can wear caps, visors, or sunglasses, but none of these is a real solution, and all bring their own problems.

The Effect of Shadows On The Court

Tennis courts are often surrounded by buildings and trees. The former tend to produce a fairly solid, regular shadow which causes few issues. Trees and plants, however, can be a very different matter. The worst case scenario, which is not unheard of, is for an east-west facing court to be partially surrounded by trees.

In this case, when the sun gets low, players are faced with a series of dark, uneven shadows on the court, interspersed with bright patches. On top of this, as a player moves about the court, the sun appears and disappears, intermittently dazzling them. This is the major problem with shadows.

The darkness itself is not an issue, but the continual contrast with the glare from a low sun makes it extremely difficult to follow the path of the ball and time your shots correctly.

Why is the Orientation of Tennis Courts Important?

If an east-west orientation is avoided, then the worst issues with dazzling sunlight and intermittent shadows can be prevented. Once courts have been laid there is not really any going back, so it is crucial to use the best available information to avoid a potentially costly error.

The American Sports Builders Association (ASBA) has established some useful, if rather complex, guidelines to help clubs to make this important decision. They recommend that, in theory, the best option is for the length of the court to be perpendicular to the azimuth of the Sun (the angle between the Sun and true north, and not magnetic north).

In other words, broadly a north-south orientation, adjusted to reflect the position of the Sun. Unfortunately, given that the azimuth of the Sun is constantly changing according to the time of day or time of year, it is not possible to determine an alignment that works perfectly all the time. The ASBA, therefore, suggests considering the season and time of day during which the courts are likely to get the most use.

In the northern USA, outdoor courts will get most use between late April and October. The ASBA recommends that as the middle of this period approximates to the summer solstice, the average angle of the Sun at this time should be used to align the courts.

In the south, courts are likely to be used all year round, so court orientation is best determined on the basis of information relating to spring or fall. If courts are expected to be used most in the afternoons in April and May, as many US college courts are, it is suggested that the courts are angled slightly west of north to ensure that the Sun is not an issue during this key period.

Aside from the position of the Sun, there are other factors that are vital in determining the best orientation of your tennis courts. For example, there must be sufficient run-off at each end, and there needs to be appropriate gaps between the courts. If floodlights are planned, the position in relation to neighboring properties will be crucial if planning objections are to be avoided. In general, there will be a requirement to make the best use of the space on the site, although this should not overrule the needs of players.

It is not easy to align your tennis court in such a way that the Sun and shadows do not become an issue for players. The best you can do is think about when the court will be most heavily used, work out where the Sun will be at that time, and ensure that neither player will need to look straight at it during that period.

The best orientation will normally be broadly north-south but adjusted for the angle of the Sun at the time the court will get the most use, and with a further adjustment to reflect the difference between true north and magnetic north.