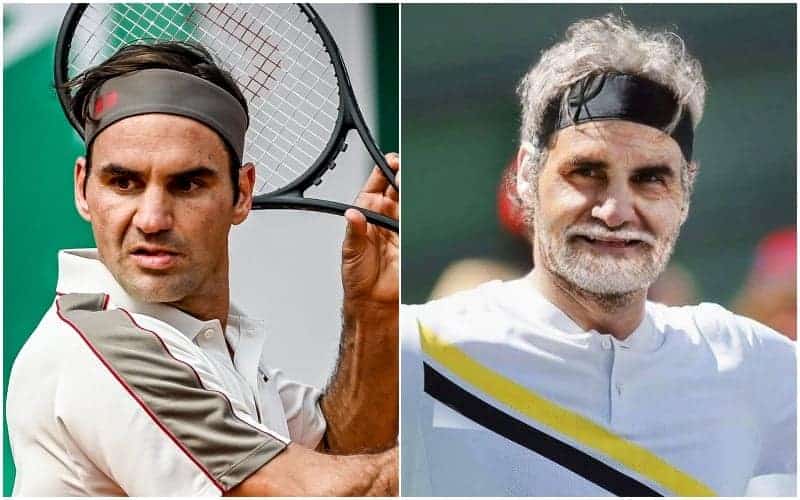 Tennis is a sport in which people begin to specialize at a young age, and in which many matches and a lot of training take place on hard, concrete-based surfaces. This takes a considerable toll on players’ bodies, causing injuries and sometimes leading to forced retirement. In recent years, however, improvements in medical support and racket technology, plus input from biomechanists, have helped players to extend their careers beyond what might have originally been possible. There is now a clear trend towards players being able to continue playing until their mid-30s if they remain motivated.

On average, professional tennis players typically retire at around age 27. For the top players, the average retirement age is significantly higher. The retirement age is, on average, higher for men than women, and less successful players of either gender are likely to be forced to retire earlier, either for financial reasons or due to a lack of medical support.

After they retire, tennis players usually remain involved with tennis in one way or another. We have written an awesome article on the paths tennis players follow after retiring, and you can check it out here.

It was calculated recently that the average tennis player retires at the age of 27 with around $300,000 in career earnings. There are several reasons, however, why this is misleading. The stated career earnings offer a big clue. Any player who has spent a significant amount of time ranked in the top 100 will have earned considerably more than $300,000. This means that many of the players included in this calculation have been playing primarily ITF tournaments and Challengers.

For these players, life is tough. They barely earn a living and require sponsorship or funding from a governing body to keep touring. They will also lack the top-class medical and biomechanical advice which top players can rely on. Players in this position will often retire in their early 20s, when either their motivation diminishes, they run out of money, or they suffer from chronic injuries. This large group will skew the retirement age calculation downward.

A second reason why the average retirement age might give a false impression is the fact that it is likely to include both genders. Female players tend, on average, to retire earlier (sometimes temporarily) in order to start a family, whereas male players can keep playing in similar circumstances. It is also possible for female players to be competitive at a high level at an earlier age than males, which, if not managed carefully, can lead to injuries and burnout. Famous names of the past like Tracy Austin and Andrea Jaeger are examples of players who enjoyed early success and retired at a very young age.

If they avoid serious injury, the trend among the leading male players is now to continue playing into their mid-thirties and sometimes longer. The leading female players are also playing longer, although the average age of the top players is lower than for the men.

One factor which will be crucial for a player deciding whether to retire will be how close they are to their peak level of performance. A player who peaks at 29 will not be thinking of retiring at 30, for example. Recent research published on www.sbnation.com suggests that male players typically peak somewhere between the ages of 23 and 24, whilst females peak earlier, between 20 and 21.

The latter is certainly borne out by the recent performances of Kenin, Andreescu, Swiatek, et al. The former, if true, does not bode well for the likes of Sascha Zverev, who is forced to look on as the vast majority of Grand Slam events are won by players aged well over 30. On the other hand, there are plenty of exceptions to these ‘rules’, with a variety of late starters and late developers peaking in their late 20s and 30s. Game style is probably also a factor, with efficient players like Federer, or big servers like Karlovic, peaking later than many.

How The Retirement Age Has Increased Over Time

Whilst retirement age data for different years is hard to come by, a 2017 study by Tennishead magazine gives a clue as to the trends. They found that in 1987 the average ages of the top 100 male and female players were 23.74 and 22.56 respectively, but by 2017 these had increased to 28.26 and 25.8. They calculated that even since 2007 both average ages had increased by 2-3 years. These figures reflect the fact that many players are retiring later, although female players tend to retire earlier than males. Tennishead noted that 42 top-100 players were over the age of 30 by 2017. These trends look set to continue into the 2020s.

Who Is The Oldest Player To Play On The Tour?

There have been some remarkable feats of longevity, although some of the statistics represent former top players accepting a wild card into a local or favorite event when semi-retired, just to see if they could still perform at that level. At present, 41 year-old Ivo Karlovic is still battling away, just outside the top 100, on the main ATP tour, and clearly still enjoying every minute. On the WTA tour, Venus Williams shows no sign of retiring at the age of 40.

In past years, one of the most astonishing stories was that of Kimiko Date, who retired when highly ranked in 1996, aged 25, and returned to play, successfully, in 2008 following a lay-off of almost 12 years. She finally retired due to injury at the age of 47. The oldest player to enjoy success was the great Martina Navratilova, who eventually retired just before her 50th birthday after winning her final US Open mixed doubles crown. On the men’s side, Younes El Aynaoui continued making sporadic wild card appearances on the ATP Tour until he was 47, and John McEnroe played doubles at 46.

Modern technology and sports medicine enable tennis players to play for longer than ever now. It may not be long before we see a 40-year-old win a grand slam singles title.

link to The Top 6 US Tennis Tournaments

There are many great tennis tournaments scheduled to take place around the world in 2021. No country, however, will host more top tier events than the USA. The best American tournaments carry a lot...

Continue Reading
link to What Do Tennis Players Need In Order To Be Good?

When you watch the leading players battling for supremacy at a big tournament, it is easy to marvel at their athleticism and technique. They can appear almost superhuman at times. Highly trained...