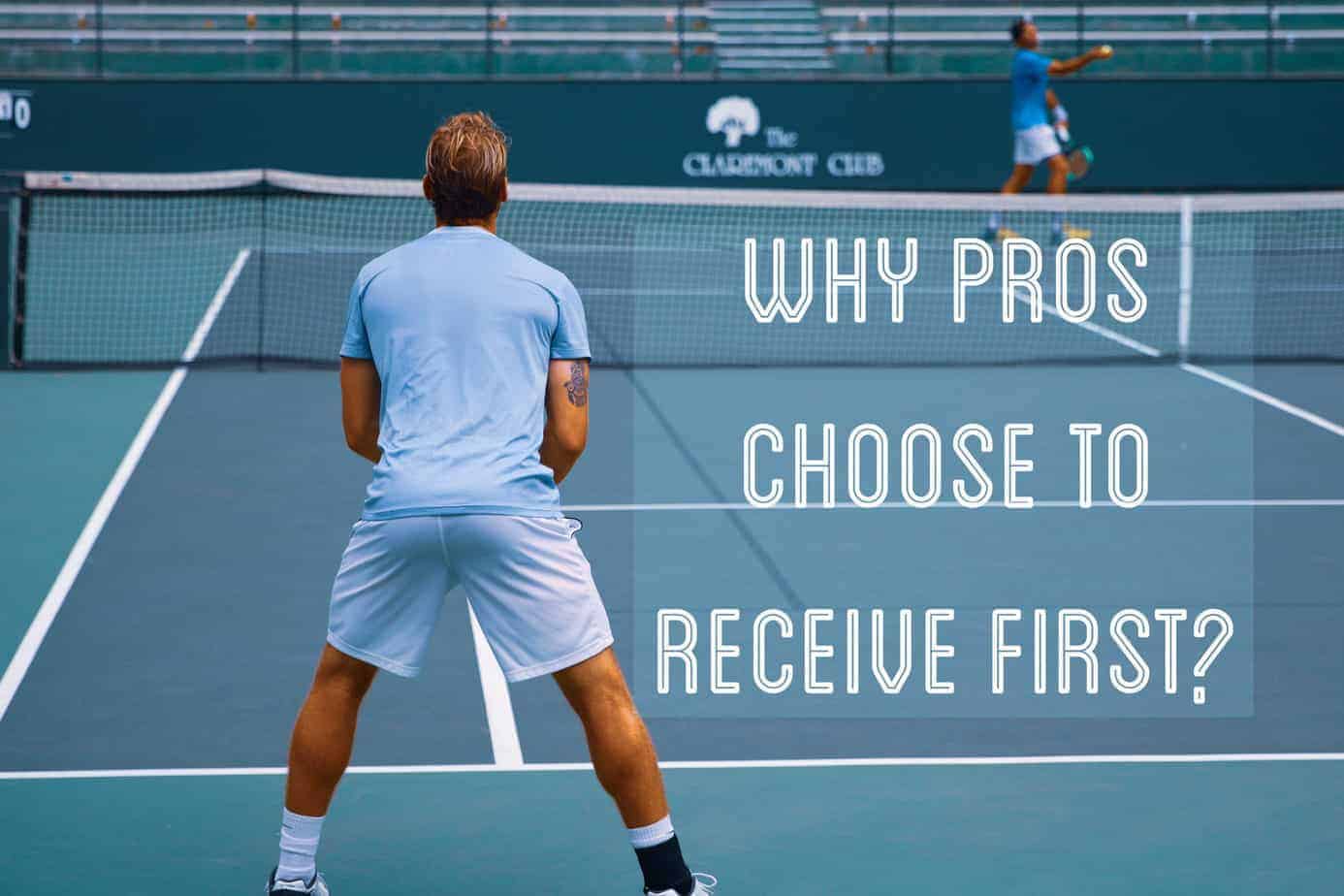 Serving is a huge advantage in tennis. On average, ATP tour professionals hold serve 75 – 80% percent of their service games and that number climbs north of 90% with the likes of Isner, Karlovic, Federer and Kyrgios. Putting simply, holding serve is the norm while breaking serve is the exception. Even the best returners in the world like Djokovic, Murray and Agassi only break serve around 30% of the returning games they play. Knowing these numbers, it is fair to assume that choosing to serve first is more advantageous for the player who wins the coin toss. However, it is very common to see players choosing to receive first. Why do they do that?

There are a few reasons why players choose to return first. First, it helps with early match nerves. Returning first allows you to play a pressure-free game. Second, it gives them a chance at getting an early break because the server might not be in a good serving rhythm early on in the match. Ultimately, the decision comes down to personal preference.

Essentially, by receiving first you get to play a no-pressure game where you can get a good feel for the court speed, ball, let your nerves settle in and throw the pressure to your opponent.

The vast majority of us experience some form of pre match nerves. That feeling in our stomachs letting us know that something exciting is about to go down. However, some players experience nervousness more acutely than others which can negatively impact their level, especially early in the match. For those players, choosing to receive first is a good idea because it allows them to play a pressure-free game before they have to serve. The logic here is that if you start receiving and play a bad game, it is no big deal because technically your opponent was supposed to hold serve. On top of that, it allows you to work yourself into the match before having to play your first service game.

In the book “Winning Ugly”, Brad Gilbert prominently argues that most players should choose to receive first because it provides a good chance of sneaking an early break of serve. His logic is that lower-level players tend to not warm up properly so you can take advantage of your opponent being cold. In addition, as we learned, pre-match nerves are another factor that can help players break serve and establish an early lead.

Effective returner: players who are effective at returning (Nadal, Djokovic, Murray, Schwartzman) may choose to return first because they can capitalize on their opponent’s nerves and lack of service rhythm early on in the match, especially if they are playing an exceptional server. Skilled servers tend to become more effective as the match progresses so returning first can be a good way to strike the first blow. On top of that, as previously mentioned, nerves can play into this scenario where the server could have an erratic start, opening the door for the returner to take control of the match with an early break of serve.

Effective Server: players who are massively efficient at holding serve (Karlovic, Isner, Raonic) but rarely break serve might choose to receive first for similar reasons. In this case, they trust that they will hold serve so they can try to earn an early break by betting on their opponents having a slow start. Here is why this is a good bet. When you play a great server, every service game has extra pressure because if you lose one service game you will probably lose the set. Players know that going into the match so not only there are pre-match nerves but you also the extra burden of having to hold serve. This compounded pressure provides a great opportunity for less effective returners to gain an early control of the match.

Having said all that, the decision to return first ultimately comes down to personal preference and several factors can play into the choice. It depends on how nervous or confident the player feels, how the warm-up went and who the opponent is. In tennis, we have to evaluate ourselves on a daily basis in order to understand how our game, mind and body feels. By doing so, we can make an educated decision on whether to serve or return, choosing the one that will most likely to give us an early edge.