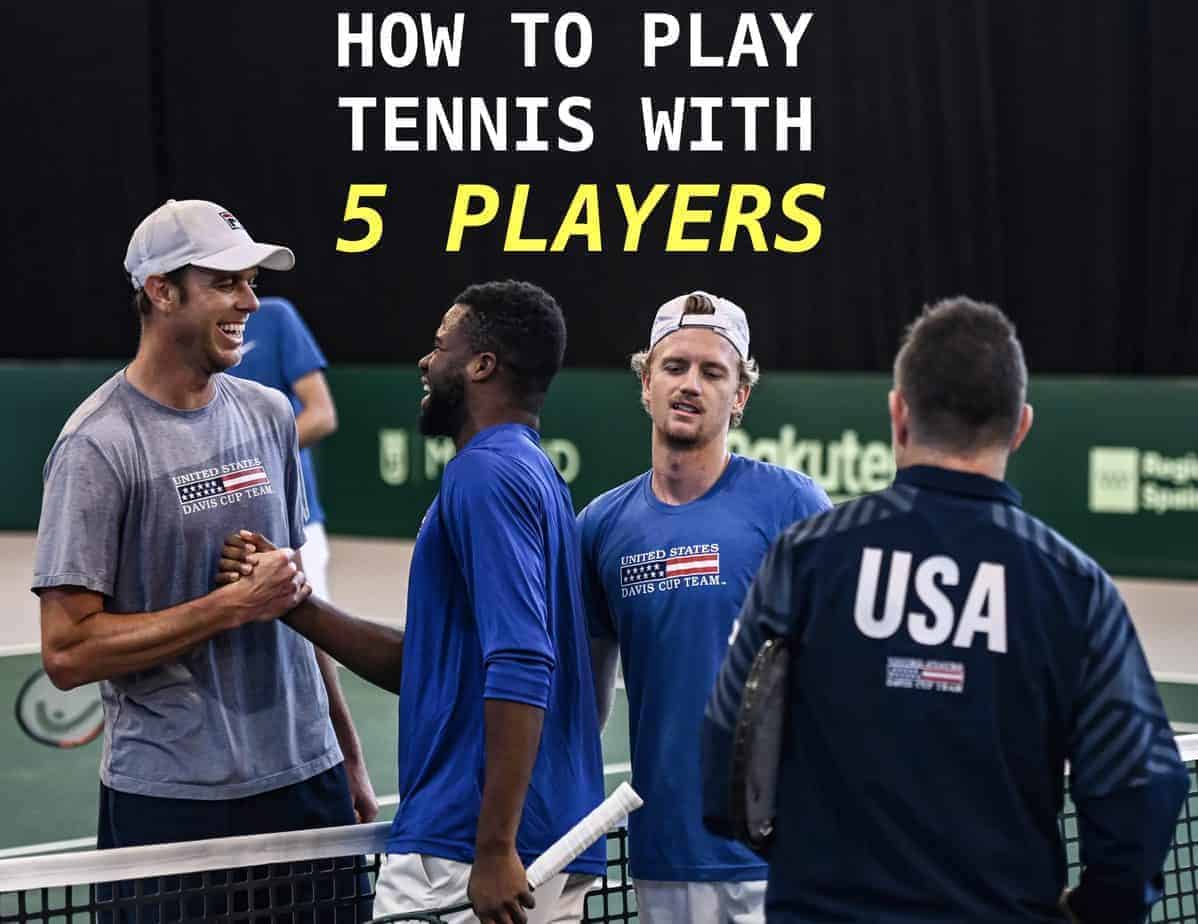 Playing tennis with 5 players on one court can be tricky. However, you can definitely have a productive practice this way. It is unrealistic to have 3 people playing on one side of the court at once, so each drill mentioned in this article will avoid that.

Playing tennis with 5 people on one court is possible with a bit of creativity. There are both doubles and singles based drills that you can practice with large groups of people. A lot of them include a rotation where one person sits out for a point or two at a time while their teammates play the point. When one person on the team misses, they will rotate out and be replaced. The key here is emphasizing quick rotations so nobody is forced to sit out for too long.

One way to set up drills and points is 2 on 2 where if a player misses, they are replaced by a teammate. This way, the players rarely sit out for more than a couple points. These are awesome for working on your doubles game. There are tons of variations of this and you can get creative with it, but here are some of my favorites:

This drill is great for the players to work on constructing points. Start with one team of 2 and one team of 3. Both teams will start with 2 players on the baseline. After the feed, anything goes. For the team of 3, if a players misses or a winner is hit on their side of the court, they will step out and the other team member will take their place. Play up to 11.

Teams should work on getting to the net quickly to end points. Usually the first team that comes forward will win the point if they can be aggressive. Just be sure to come forward on the right ball. Additionally, it is usually most effective to come to the net as a team.

One Team Up, One Team Back

This drill is great because many doubles points end with one team at the net and the other on the baseline, so it is great to practice that situation. One team with start on the service line, the other will start on the baseline. The 5th player (the one sitting out on the team of 3) will feed the ball in. Remember if a player on the team of 3 misses or a winner is hit on their side, they are replaced. Keep the game moving as quickly as possible.

It doesn’t matter if the feed comes from the baseline or net side, but be sure to play both ways as they are different. After the feed anything goes, winners included. Play up to 11. Make sure you play enough games so that everyone gets a chance starting at the net and on the baseline.

Volleyers in this game should have a clear advantage as they are able to be more aggressive. Use angles and remember that the short and low volley can be really effective here. As the volleying team, close the net hard and try to keep the points short.

The baseliners should try to produce shots that will set up easier balls. In other words, don’t try and hit winners on everything. Construct the point so that you make the volleyers pop the ball up, then go for the winner. Finally, be aware of how hard the volleyers are closing and keep them honest with the lob.

Both Teams at Net

I like this drill because it is a great way to work on making your hands quicker. Both teams will start on the service line and again, the 5th player will feed the ball in. Anything goes after the feed including winners and lobs, so be sure that the feed is not too easy. Play to 11 and make sure that everyone has a chance to be on the feeding side and the side receiving the feed.

The strategy here is pretty simple: earn a ball that you can finish the point with. In order to do this, your target should really be at the other team’s feet so that they will be forced to hit the ball up. Additionally, the team that is able to close the net more effectively will win the majority of the time, so try to get on offense as quickly as you can.

There are a couple of great drills that you can do to work on your singles game with 5 people on the court. These will work on your consistency and all-court game. Just make sure you are ready for a sweat before you get into these ones.

This drill is competitive and forces you to battle for every shot. If done correctly, it will teach you to create good margin on your balls and improve your ability to stay in long points. You can actually do this drill with as many players as you have. With 5 people, start with 3 players on one baseline and 2 on the other. Someone feeds the ball and the rally begins. Each time you hit a ball, you rotate out and the next person steps in. The style of drilling where you hit only one ball called “ping-pong.”

The only two rules to this drill are that you cannot miss in the net and you cannot hit winners. If you miss the ball in the net, you lose and are eliminated from the game. If you happen to hit a winner, you restart the point with no consequences. This drill is most productive when the points are long and the errors eventually come from being fatigued.

The strategy for this drill is pretty simple: don’t miss and make your opponents tired. Because you only miss if the ball goes in the net, you should eliminate that as a possibility. That means you should be clearing the net by several feet with lots of shape and spin on your ball. Push your opponents to the corners of the court so that they are forced to run more than you.

King/Queen of the Court

This is a classic way to play points with an odd amount of players. You can do this starting with a serve or feeding the ball out of the hand. Here’s how it works:

Start with 1 player on the “king/queen” side and the rest of the players on the “challenger” side. The goal of this game is to earn your right to the king side and win as many points there as possible. In order to get to the king/queen side, a challenger must win 2 points in a row.

The strategy for this game is pretty simple. Just commit to your style of tennis and see how you do against your friends. Get competitive and have some fun!

Hopefully by reading this article you found some inspiration for what to do with 5 players on a tennis court. Remember to think outside the box and be creative with these drills. All of them can be done with any unconventional number of players on the court, so don’t let an odd number keep your group from having fun and improving your games together.

If you have any questions or comments on this article, please comment below and we will respond as promptly as we can!