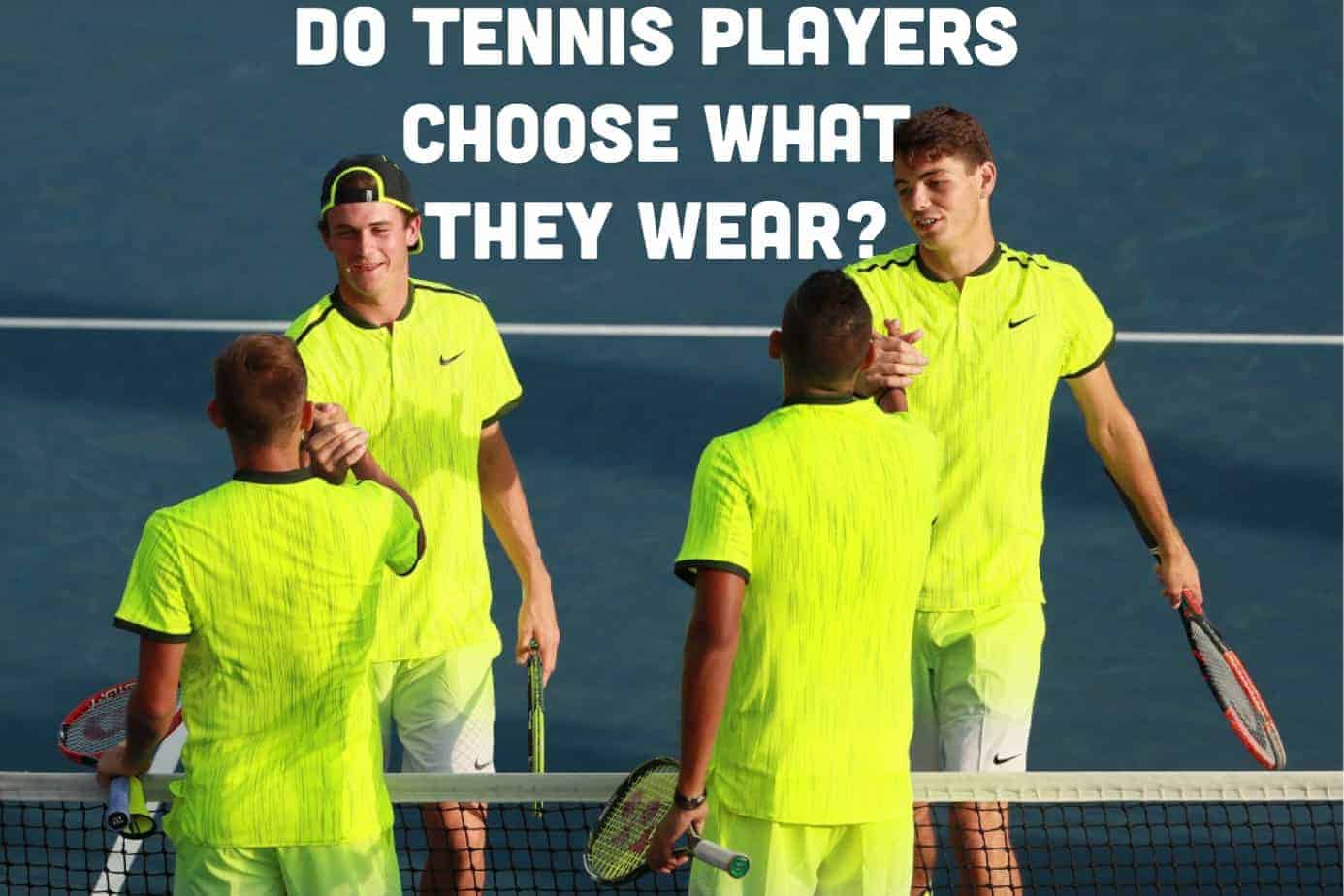 The picture above illustrates something very common in tennis: players competing against each other wearing the same outfit. I have been asked several times by family members or friends outside of tennis why tennis players so often wear the same outfits, especially if they are playing against each other. The reason why this happens is because brands like Nike or Adidas sponsor multiple players and they are contractually obligated to wear the latest gear during tour events, even if they play against someone sponsored by the same brand. But do players get to choose what they wear?

In professional tennis, the vast majority of tennis players do not have a full choice of what they wear once they are under contract with a clothing brand. Tennis players are often sponsored by the same clothing brands (Nike, Adidas, Lacoste) and are required to wear the newest collection by their individual sponsors. While brands typically have a few options within each collection for players to choose from, ultimately the clothing sponsors have the final say in the matter. The latest clothing lines are pre-determined months, if not years in advance and most players have no input in the designs. The only players who work directly with brands during the design process are tennis’s biggest stars (Nadal, Federer, Osaka, Serena). Brands use this practice to highlight their stars in a field of players wearing similar clothes.

If you want to learn more about how the partnership between tennis players and clothing brands work, make sure you keep scrolling.

While most people try to stay away from the subject of money, the fact of the matter is that clothing sponsorship deals between players and are a strictly business decision from both ends. For players, clothing deals are a source of income outside of prize money from tournaments. On the other hand, brands use the players as a marketing tool in order to drive up sales of their newest collection. This is a common practice and it has been around for a long time.

The reason why I want us to focus on the financial side of it is that players and brands often make it sound like there is a lot of brand loyalty involved between their partnerships but it ultimately comes down to money. Remember how shocked everyone was when Roger Federer switched from Nike to Uniqlo? We were so used to seeing Federer wearing Nike that it seemed crazy they could not reach a deal. However, when you look at the numbers, it all makes sense. Federer went from making ten million dollars a year with Nike to a staggering thirty million with Uniqlo.

At the end of the day, the choice of what a player will wear on the court comes down money: players will choose to wear the clothes of the brand that is willing to pay the most during negotiations. Regardless if the numbers are in the millions or thousands, the choice typically goes for the highest bidder. For brands, they are looking to sponsor players who have the largest amount of eyeballs on them. The further the player reaches in a tournament and the higher they climb up the rankings, the more attention they will get, making them more valuable for brands.

Going back to the issue of players choosing what they wear, we need to learn about how sportswear brands operate in the tennis world. For starters, most companies launch four different lines per year; one for each grandslam. In each grandslam, brands establish a distribution area for players to try on and pick up their clothing for the event. This practice is mostly common among brands with large budgets like Nike and Adidas (smaller brands might deal directly with players before the event). The clothing lines for each grandslam are designed and produced up to fifteen months in advance. In this process, brands have their own vision on how the final product will look like. Some players might be consulted and give input on the final design but it ultimately it is the brand that decides the overall style of each line.

The only players who have a direct input on the design of their clothing are the sport’s biggest stars. Brands like to highlight their most popular athletes by giving them unique clothes. Nike is one of the brands that excels at this. Rafael Nadal, Naomi Osaka and Serena Williams have their own Nike lines and logos (Federer used to have it as well with the RF logo). In this case, brands work closely with players in order to create something that is a true representation of their characters. Companies understand that the top players have a massive following of loyal fans and they are the main drivers of sales. Therefore, making sure the star players are happy with their outfits is an important part of their business strategy.

You have a choice

While most professional tennis players don’t get to choose what they wear, you still can. We separated some of our favorite gear for you.